Do you ever have a day where the beauty of your life hits you all at once? Where all of the wonderful, fascinating details scream at you, "Look at me!" and you actually sit up and take notice? Where the problems don't seem as big as they were the day before, where the small things make you ridiculously happy? I woke up this morning feeling optimistic and joyful, euphoric even. There's no real reason for it. It's still cold, half the people I know are sick in some way (sinus infections, stomach upsets, influenza) and overall this week wasn't the greatest. I was exhausted for most of it and thinking that I was fighting off a cold myself and unable to take time off work if I had really needed to, adding to the stress. But, none of that matters today. I got a good night's sleep and woke up to my pets being loving and wonderful. I started my walk to work thinking that, overall, my life is amazing. It has little moments of dissatisfaction, like when I see pictures of places I'd like to travel to and realize that instead, I'm stuck in my office. Or lately, any picture of a beach makes me ache with longing to be there, in the warmth and sunshine and salty ocean. But you know what? I'm working toward my goals. I'm working to make my life, my shared life with Shane, to be what I/we want. That is a beautiful, wonderful thing, and I am so incredibly lucky.
On my walk to work, I got to see this: 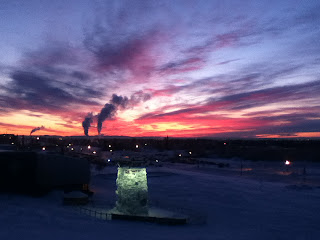 I was even a bit early so I could stand there and appreciate it for a few minutes, guilt-free. How many other people around here got to enjoy that sunrise? How many were taking their time and got to really see it?
When I got to work, after taking care of a few details, I opened Facebook and found this article about empathy, courtesy of my friend Hannah. It's beautiful and if you haven't read it yet, you should.
Today, I am at peace with the world, and I wish the same for all of you.
Posted by SisterX_83 at 10:09 AM 1 comment:

For various reasons not at all related to making babies, I stopped taking birth control in the autumn. Shane and I have agreed that this has been a very good decision. The problems I'd been noticing in myself went away almost immediately and I even lost almost ten pounds in the first two months after I stopped taking it. Just that, and the relief of knowing that the weight I've gained over the past several years wasn't actually because of me (stupid pills), has made me feel more confident about myself.
Now that I've returned to normal hormonal functioning, it's also been fun for me to notice all of the differences in myself each month. Scientifically, I knew that changes in women's hormones lead to certain notable things. For instance, when a woman is ovulating she's more likely to be attracted to a strongly masculine face or a more "manly" man, whereas at non-ovulating times women are more likely to choose sensitive, more effeminate-featured men. (Hello, Orlando Bloom!) I'm lucky because when I look at Shane I see both the boy I met and the man I married, so I get the best of both worlds. :) But even watching movies, I've noticed changes in what actors I find attractive depending on where I'm at in my cycle.
There are other things, of course. While the pill helps some women regulate their mood swings, it seemed to make mine worse. Shane says that I seem more in control and "less crazy" before my period now. On the other hand, I now get zits around my period like I'm in high school again. No fun! And I seem to get cramps no matter what. But I'm still having fun observing these changes in myself. Science!
The one thing I completely forgot about, but probably should have expected, is a serious craving for chocolate. Not sweets in general, just chocolate. Last week I was raiding the cabinets searching for any sort of chocolate to the point that Shane noticed and gave me one of his "holy crap you're a little nuts right now" looks. Disaster averted: we had both hot chocolate and some leftover Christmas candy in the house. :) I'm also using the cravings as an excuse for why I bought chocolate ice cream and $23 worth of bulk-bin chocolate chips on Saturday. It's a good reason, right?
But I don't want to be eating crap every time my period rolls around. If for no other reason, it's not exactly going to make that time any more pleasant if I'm feeling bad about my eating habits in addition to everything else that happens. So I'm trying to find better ways of controlling the need for chocolate and I think I've found the perfect solution: oatmeal. Hear me out! Oatmeal is my go-to winter breakfast because it's easy and hot and healthy and I can change it up every day. I've made PB&J oatmeal (not bad, actually), oatmeal full of nuts, seeds, and dried fruit, oatmeal with fresh fruit. I've used brown sugar, honey, and maple syrup as the sweetener. (Not all at once!) I've put in nutmeg and cinnamon to change the flavor. It's totally versatile! One of my favorites for the past couple of weeks has been chai oatmeal.
Well, now I know I can add a little bit of chocolate too. The heat from freshly cooked oatmeal melts the chocolate perfectly and everything you put in the oatmeal becomes covered in the gooey sweetness. It's perfection and it clears up any chocolate cravings I might be having without falling off the healthy eating bandwagon. I didn't add any other sweetener, since the chocolate is sweet enough. And when I can, I find dark chocolate chips which helps to make it slightly less sweet and just a bit healthier than it would be with milk chocolate chips.


Black Forest Oatmeal:
About a serving and a half of oatmeal
Enough water to cook the oatmeal (I cook it in the microwave, on high for three minutes)
A cup of pitted, frozen cherries (thawed overnight in the fridge) or 1/2 cup of dried cherries
1/4 cup of walnuts or pecans
1/4 cup (or slightly less) of dark chocolate chips

Cook the oatmeal. When it's still very hot, mix in the chocolate chips, then the walnuts and cherries. Consume and be happy.

Chocolate Coconut Oatmeal:
Cooked oatmeal
About 1/4 cup of chocolate chips
About 1/4 cup of unsweetened coconut shavings
1/4 cup of any type of preferred nuts (I love hazelnuts in this one)
Optional: a dash of cinnamon

Mix in the chocolate first so that it's all melty and covers the oatmeal, then mix in the other ingredients. Consume, and pat yourself on the back for choosing something healthier than a Pop Tart for breakfast.
Posted by SisterX_83 at 9:53 AM No comments:

I did my first ever guest post at Mr. Money Mustache. Wow, what an honor! It is, of course, about my one area of "expertise"--non-car commuting in the winter.
Posted by SisterX_83 at 10:51 AM No comments:

Yesterday on my walk to work my right bootlace broke. And, that pretty much sums up how the rest of the day went. Nothing major and dramatic, but full of small irritations.
I checked around the house for a spare shoelace last night but didn't find anything that would work. So, no big deal. When I was getting ready for work this morning I decided that, since it's warmed up so much the last few days (about 60 degrees!) I'd be fine wearing my "winter" Dansko clogs. They've got rubber soles so they're not as bad on the ice as my other ones. I've worn them plenty of times and, mostly, they're fine.
Except when it's this cold. Apparently I over-estimated the temperature because it's still cold enough to freeze rubber. Don't worry, I wore two pairs of socks so my feet were totally warm. But thanks to the ice leftover from the freezing rain a few weeks ago, the dusting of snow on top which we got yesterday, and the frozen rubber of my shoes, I had to do an odd shuffle instead of just walking. I nearly fell so many times but by the time I thought, "This was a really bad idea," it was too late to turn back. So I soldiered on, being very careful and moving more like a cross country skier than someone walking.
And then I reached the hill. It's a popular sledding hill, so while there is a bit of a path carved by me and others who walk, there isn't exactly any level ground so even on the best of days it's tough going. And, it's been worn mostly smooth by all the sledders packing down the snow. I was stepping really carefully, placing my feet before putting weight on them so that I didn't fall over. I made it almost to the top, where there's a fence and the assurance that at least I wouldn't tumble fifty feet back down the hill. Ten feet away from the fence, I started slipping backwards. I fell, got up, fell again, and while I was trying to hold myself up I just kept slipping further and further away from where I needed to be. I debated just clawing and crawling my way back to the top but decided that was too undignified. (Because, apparently, I wasn't already undignified?) When I stood mostly upright I ended up using my purse as a weight to help throw myself up the hill and that worked. I made it to the top with only one or two more small slips.
After I rounded the fence and felt secure again all I could think was, normal people don't have these problems.
And that about sums up my life.
Posted by SisterX_83 at 10:09 AM No comments: