I have an 18 page paper, and accompanying 15 minute presentation, due in just under a week. So what have I been doing with my time? Pretty much anything I can to avoid working on these projects. For the first time all semester our apartment is starting to look under control, somewhat clean. I got through mountains of laundry over the weekend (all of our bedding--some of it got put away for the summer even though it's STILL FREAKING SNOWING OUTSIDE!) and the dishes were finally not only washed but put away. For about ten minutes we had a clean counter, until we needed to cook dinner at least.
I know most people view procrastination as a bad thing. Oh, you're pushing off what you should really be doing! You're wasting time! But I find that I frequently get a lot of good things done in a very short time when I'm procrastinating. Last night, one of those things was making this recipe for lemon cream pasta with chicken. I modified it just slightly, mostly by adding peas. Until I got home from work, I didn't even know what we'd have for dinner. Most of the items on our weekly meal plan are things which Shane cooks but he had class and wouldn't be home until 7:00. For the first time in weeks, I did not have class on a Monday. It felt so decadent, like stolen time. I played with the dog, I snuggled the cat.
And I figured out dinner. We rarely buy lemons, so it was fortuitous that we happened to have some. And thawed chicken, and even heavy cream! (Shane's been making ice cream, without an ice cream maker, and it's working out very well. So far just coffee and vanilla flavors, but yum! That's why we have the cream.) Dinner was remarkably easy to put together and I even got another load of dishes started. For once, I timed things perfectly. I was just zesting the lemon peel over the pan when I heard the garage door open, signalling that Shane was home. (I walk but he bikes.) I had a hot meal waiting for him after a long day (11 hours of school/homework) that tasted like it came from a restaurant even though I felt rather lazy making it, it came together so easily. It was a perfect start to the evening. We sat down and got to chat for a few minutes, talk over our days and the coming week, as we savored our meal. It might not seem like much but those little moments are what, for me, makes up a good life.
It's incredible that, some days, you can have the perfect meal arrive. I've never made any sort of lemon chicken or lemon pasta recipe before but this one will forever evoke memories of one fantastic evening.
And yes, in between all of this I did manage to get a bit of work done. Only 15 more pages left to write on my paper!
Posted by SisterX_83 at 11:16 AM No comments:

That title sounds way worse than it is, but it's also pretty accurate right now. One of the reasons I haven't written much lately is because this winter just seems to be dragging on forever and I don't want to complain too much. This is always the ugly season, the time of year when the snow is melting and it's dirty and there's mud everywhere. But usually, it's warm by now. Instead it's been an average of 15 degrees colder than normal, one of the coldest (if not the coldest) springs on record. It was -35 at the end of March. March! Even into the middle of April we were getting negative temps, and the highest temperature so far this month was only 47F. It's...it's insane. Everyone's ready to go all The Shining on each other. I can only imagine that the weather gods are having a good laugh at us, too, because we keep getting a few days at a time of decent weather, just enough for people to think, "Oh good, summer is finally coming," before the temps drop again. Or we get more snow. I get the feeling there's some weather god out there wiping tears of mirth from its godly eyes and saying, "No, no, seriously this time. I mean, seriously guys, I'll make the snow melt. It'll be gorgeous and...no, fuck it, I'm totally messing with you! Here's another foot of snow! Hahahahahaha!!!!"
This is a picture I took on Monday: 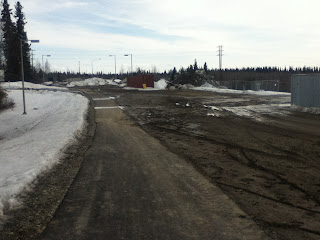 Hideous, right? And then it snowed again, so we'll have to endure even more of that sight. No one likes Breakup, it's called Alaska's ugly fourth season (since we don't really have "spring" per se...just ugly snowmelt and then a week of, "Almost summer,", then summer). Or simply, the Ugly Season. Now, it's become the season of bitterness. If you mention the weather to anyone (and of course it's one of the main topics everyone talks about) they instantly turn bitter. "Yeah, winter's never going away this year. We're going to get, like, two weeks of summer and then it's just gonna snow again."
Normally by this time I'd have lots of pictures of my lovely plant starts to show off, but I haven't even gotten dirt to plant things yet because it feels like summer is never coming. (This is a mistake and I know it--my poor plants will never get a chance to fruit if I don't start them in the next week or so!) This is just going to be the year without summer and the thought makes me crazy. I'm so done with sweaters, with being cold, with wearing layers and even pants. I want to wear summer dresses and ride my bike without watching for ice and I'd like to actually freaking put my winter boots away for a few months. But no. Not this year.
Even my pets are pissed off about the weather, particularly the cat. We got an Easter box in the mail from my MIL and he seems to think that it's the perfect place for a cat to curl up. It's low and square and not too small but not big, either. He mostly fits, with a limb or two overflowing usually. It's been sitting on our table for weeks because the cat spends hours every day lying in that box, watching the snow melt and then fall again. On days when it is snowing, I hear all about it first thing in the morning from him and he gets pretty pissy. I can't blame him since I feel the same way.
So if I'm quiet, it's a seething sort of quiet. A waiting but not hopeful quiet. At least about the weather. There are plenty of good things going on in my life, which doesn't actually revolve around the weather, but I'm not quite ready to share yet.
I'm also super busy (or should be, at least) trying to write an 18-20 page paper and a 15 minute presentation for my class. Only two more weeks....