I'm so proud of myself! I'm finally growing tomatoes! I mean, more than a few tomatoes! Most of them are still just the size of peas, but a few are getting quite large. And it's not just one kind, either, it's both the "Cassady's Folly" 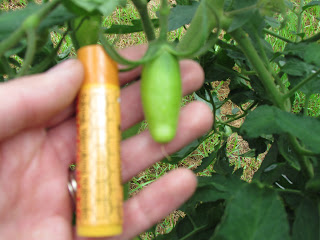 and the "Cosmonaut Volkov" tomatoes which are crazily producing. I've been pretty careful about trying to pick off the suckers and some of the branches without flowers so that more energy and nutrients go into ripening the tomatoes. Actually, at this point some of the branches with flowers are coming off too. If I let them, these poor plants would try to produce several hundred tomatoes (I've counted over 30, and those are just the ones I've found; there are also another hundred or so flowers on the plants). And all this from just four of my plants! I'm totally keeping these tomatoes on my list of ones to keep growing in the future. 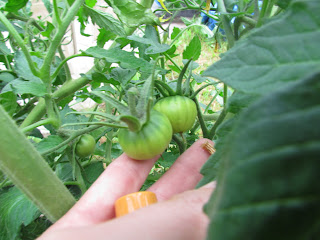 Two of my biggest "Cosmonaut Volkov"s. Can you believe I didn't notice these ones at all for a while? What's even worse is that there's an equally big tomato right next to them that I didn't notice even when I was taking the picture!

You never really think about it, but finding some produce is rather hard. At this stage, all of my tomatoes are green and on green plants. Can you blame me for missing some? They're not small plants, either, and they keep growing. So I have no idea what an accurate count of my current tomato crop is, just that it's above 30.
I'm finding this same difficulty with my peas. I can look at a pea plant once and not find anything. Go back five minutes later and suddenly I've spotted a giant pea pod! How did I miss that before? So I've been looking over my pea plants very, very carefully. I'm sure it would look crazy if someone else was watching me, since I'm so intent and trying not to miss anything about these plants. But I'd rather look crazy and gather the fruits of my toils.
I've started collecting some fireweed flowers so that I can make fireweed jelly. I've never actually done it before, at least not that I can remember, but my grandmother made it. I remember it as being very sweet with a mild flowery flavor. I'll need at least 2 1/2 very packed cups of flowers (at the moment I only have about 2) but I'm actually aiming for 5 cups. That should make about 6 cups of jelly.
You can use the buds as well, but they're such pretty flowers that I'd rather see them bloom. Plus, when I was out I saw a bunch of honeybees collecting pollen from the flowers and I don't want to take that away from them. I bothered the bees as little as possible, waiting to pick flowers until they were done with them, since they have as much right to collect the pollen as I do to collect the flowers. From the number of bees I saw, I suspect someone in my neighborhood has a hive or two.
I'll post more details about the jelly making after I actually try it. :)
Posted by SisterX_83 at 8:58 AM