This weekend ended up being a food preservation weekend. I decided to try a couple of things I've never done before, and I'm so glad I did.
For the last couple of weekends I've collected cucumbers from the farmer's market. I'm not a huge fan of fresh cucumbers (except with hummus, but I didn't feel like making hummus) but I am a fan of pickles. I've never made them before but I found an easy recipe in the book "Put 'Em Up!" and tried it. It worked! At least, I think it did. I haven't tried them yet. Vinton put a lot of different pickle recipes in her book, for many different vegetables (including carrots and beans) but I figured I'd start with the classic cucumber pickle. I don't have a crock, however, or anything that would work as one. I know you can use a plate in a glass bowl, but we have the problem of round bowls and square plates. Luckily, the recipe I used was meant to be water-bath canned rather than crocked. Some people like pickled foods for the beneficial probiotic bacteria that can be found in fermented foods, but the canning process kills any bacteria (that's what it's meant to do, after all) so these pickles won't have that. I'm just going for yumminess. 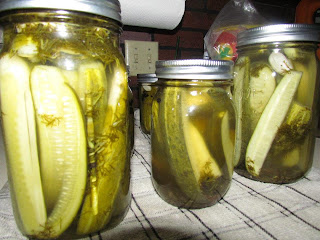 The canning process tenderizes the pickles. I'm going to wait about a month before I bust a jar open to taste them, just to be sure the flavors mix properly.
I got seven jars from about 20 pickles, two jars of which are quite large, and I thought that at the rate we eat pickles it would probably be enough. But now I'm so excited that I just want to make more. So, I think I will. At the very worst, I can give some away as Christmas presents. Or give some to any friends who get pregnant.
In addition to getting the cucumbers from the farmer's market, I also bought the dill for the pickles there. I used a whole bunch, so these might be very dilly pickles! (I'm going to taste them before I give any away.)
I also canned some cherries, using a recipe from the same book. L and I both had some cherries that were about to go bad so I wanted to preserve them. After we biked to the farmer's market together, we biked back to my place to clear out my bag, then to her place for her cherries, then back home for me. (And then to the store for the pickling items I didn't have...lots of biking that day, since I also biked to the opera rehearsal.) The recipe I chose was "Classic Cherry Preserves", but what I ended up with was more like preserved cherries than cherry preserves. I think I just didn't boil it long enough because it never gelled. Oh well. They're still going to be yummy and useful for lots of stuff. 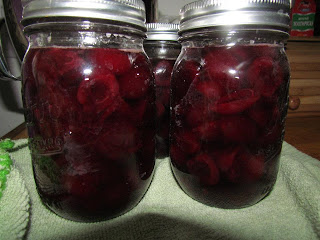 I'm imagining warm winter tarts or crumbles or crisps. Mmmm.... The amount of cherries I had made four jars plus a little bit. Two jars will go to L and two to me, which is not nearly enough so I need to buy more cherries this week.
I tasted the little bit that was leftover and, even after I realized I wanted to bake them in something, it was hard to stop eating them! They're quite tasty. But I finally stopped munching them and had just enough leftover to justify using them (and their juice) in my scones recipe. (Since there was so much liquid from the cherries, I just omitted some of the milk.) If you want to know how they tasted, well, I had two scones for breakfast. :)
There are not many sounds more pleasing than the "pop" of a canning lid as it seals. What should I attempt to can and preserve next?
One final note on canning: my mom always said to put the jars upside down while you're waiting for them to seal, but from what I've read on the internet there are people who are absolutely horrified by that practice. I have no idea why, or why it's considered unsafe (my mom, and probably yours too, if not your grandmothers, canned things that way for years and everyone lived...) but I didn't do that with these jars. I just left them right side up, listened for that pleasant "pop", and then checked the seal by pressing down on the center of the lid. If there's no give, it's properly sealed. A basic internet search will tell you what to do to can safely, how to look for signs of spoilage (like bulging lids) and things of that sort. Any canning book worth buying, like the one I have, will also have that basic information. "Put 'Em Up!" also has a section on signs that look bad, but really aren't.
Never skimp on the processing time your canning book tells you (both of these needed ten minutes in the boiling water bath, but others need 15 or more) and you should be ok. Honestly, if I can preserve food this way I'm sure you can too. There are so many people out there who seem to think that home-canned food will lead to death and that's rubbish. Follow a recipe, check occasionally for signs of spoilage, don't eat anything that seems suspect (follow your instincts) and you'll be just fine.
I really, really should get an actual set of canning tools. Like a jar lifter. That would make my life so much easier, rather than using regular (slippery) tongs and Shane's long beer-brewing spoon to carefully lift things out of the water. Anyone have some they want to loan me?
Posted by SisterX_83 at 11:00 AM